'Experience isn't what happens to you, it’s how you interpret it'

Emotional intelligence is categorised in the field of soft skills and can help professionals to create and maintain productive relationships with colleagues, customers and contacts.
Refine your search
Refine your search
Show all filters

Recommended
Infero Training Ltd
Think, Be and Work Smarter Intellectual and technical skills are no longer enough on their own to assure success in...

Churchill Square Training & Development
Emotional intelligence, also called EQ, is the ability to be aware of and to manage emotions and relationships. It’s a...

LEORON Professional Development Institute
This Emotional Intelligence course is made up from the materials of scholars and authors on the subject. The class experience...

Action and Theory Ltd
This Emotional Intelligence (EI) Masterclass covers a topic that is relevant to all professionals, whether they are working in collaboration with...

4.7 (3)
Action and Theory Ltd
This Emotional Intelligence (EI) Masterclass covers a topic that is relevant to all professionals, whether they are working in collaboration with...

MPW Learning
Being emotional intelligent means having the ability to build effective relationships, influence people and manage own and others' emotions. Learning how to motivate...

5.0 (1)
Mastery Associates
Warren Bennis asserted that ‘IQ is a threshold competence. You need it but it doesn’t make you a star. Emotional...

Be a Better Leader With Emotional Intelligence

MPW Learning
Emotional Intelligence is the ability to build relationships, influence others and harness and manage emotions. Learning how to motivate yourself,...

Hemsley Fraser
This course will help you to really understand what emotional intelligence (EQ) is and why it is such an important...

Maximum Performance
Rational, problem-solving intelligence is not enough. You need EQ – the ability to monitor one’s own and others’ feelings and...

Acudemy Training
Emotional Intelligence is a set of emotional and social skills that collectively establish how well you perceive and express yourself,...

HSQE Training Ltd
This course will introduce the concept of emotional intelligence and look at how you can use it in effective and...

5.0 (6)
London Business Training & Consulting
Emotions are a key part of business not only human evolution. By attending this training workshop, you will better understand...

4.7 (10)
Hill Training Ltd
Our ILM accredited emotional intelligence workshop helps you to endure the blows and resolve debilitating memories, by exploring our modules on...

Infero Training Ltd
Think, Be and Work Smarter Intellectual and technical skills are no longer enough on their own to assure success in...

London Business Training & Consulting
This Training Workshop will help you to master your own emotions in all situations and create balance between head and...

4.8 (4)
Mobile Team Challenge
This in-house on on-line training programme works to enhance the skills and professionalism of internal trainers and enables them to...
Displaying 1-20 of 113 results
123456
Show More (93)

Developed in 1990, the lead approach to gaining and practicing Emotional Intelligence was developed by John D. Mayer and Peter Salovey. The “Four Branch Model,” is a system of guidelines for developing and honing skills in emotional intelligence. It is comprised of four main areas of practise, each of which brings specified capabilities:

By and large, the “Four Branch Model” has remained the most popular and trusted domain of learned emotional intelligence. As such, it serves as a major theme in many emotional intelligence courses and programmes, which work to enable delegates to apply its principles in the workplace and in their personal development endeavors.

With the valued interpersonal skills that accompany training in emotional intelligence, delegates become better able to deal with the spectrum of social situations that occur in the workplace and in everyday life. Understanding emotional intelligence is also a valuable skill for those in the childcare sector and is a significant part of many child psychology programmes.

Whether it be colleagues, employers and contacts, or neighbors and friends, emotional intelligence can help individuals build relationships and navigate social situations with ease and confidence.

The significance of Emotional Intelligence programmes

Training in emotional intelligence is a valuable asset in its own accord. In terms of personal development, high emotional intelligence can help individuals to recognise and control their emotions. This will consequently lead to enhanced happiness motivation and satisfaction in life. Within a professional context, the ability to manage one’s emotions and the emotions of others can translate into increased job performance and the building of productive and valuable relationships between clients and colleagues.

Emotional Intelligence has also become a key player in coaching and mentoring practices. More and more, the ability to understand emotions is being considered an integral aspect of any reputable and successful professional coaching model, creating an increasingly robust link between the two.

In collaboration with MPW Learning, a programme called ‘Leadership Pathway Programme’ was designed to bring all of the skills of a large high street charity organisation management team up to date. After introduction of the programme, common working practices were restructured, productivity increased and management satisfaction improved. 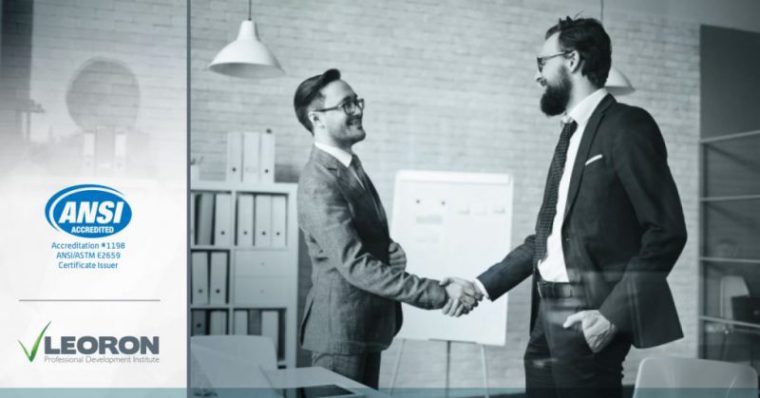 LEORON Institute is accredited by ANSI as, ANSI-Accredited Certificate Issuer.

Read more
Newsletter
Subscribe and get the latest news, discounts and giveaways sent straight to your inbox!
You are now registered for the findcourses.co.uk newsletter.